COVID-19 hit the Netherlands with one month time lag

The first case of COVID-19 was diagnosed on 27 February in the Netherlands and changed the economic situation in the country. The pandemic reached a first peak in mid-April and a second one in mid-September, as tourists returned from their vacations abroad (status: 14.09.20). 88,573 cases were reported (0.5% of the population) and 6,298 deaths until then. The Dutch government reacted briskly, but with limited measures at first, like the ban on all public events and gatherings of over 100 people. Then, the government additionally declared the closure of schools, cafes, bars, restaurants, sports clubs, coffee shops and other establishments where distancing requirements were not possible. All public gatherings were banned. Shops remained open with distancing rules and most of manufacturing activity continued. There is no obligation to wear face-masks except in public transport. Overall, the aim is to build up a wide population immunity. The Schengen borders were closed in March, but some internal Schengen borders remained open (e.g. to Germany, while Belgium closed its border to the Netherlands). From 11 May onwards, public life started to resume gradually. In mid-June, the borders with EU/EFTA countries, as well as with single other countries, opened again. Due to the timid government measures at first, the main economic impact was not seen before April. This explains why the economic downturn in Q1 2020 was relatively limited at -1.5% quarter-over-quarter (QoQ), while the decrease in Q2 2020 at -8.5% QoQ was quite strong for a Northern European country.

The main forces behind this development were private consumption, which decreased strongly despite open shops, as well as foreign trade, where the drop in exports outpaced the drop in imports in the first half of 2020. In Q2, this was compounded by a strong fall in investments. For the second half of 2020 and the year 2021, a robust but uneven recovery is expected, with a strong dynamic in Q3 2020 and a limited one in the following quarters depending on the development of COVID-19 cases and the government’s restrictions. The recovery is being supported by a series of fiscal measures. The first two packages amount to about EUR 35.6 billion (4.6% of GDP) of spending in 2020. They include compensation of up to 90% of labour costs for companies with strong revenue losses, support for entrepreneurs and self-employed, as well as the scaling up of short-time work schemes, and deference of tax payments without penalties. Public credit guarantee schemes were introduced (EUR 33 billion, 4.3% of GDP) and a new support package was approved in August (EUR 12.5 billion, 1.7% of GDP) to extend the fiscal support until June 2021. Furthermore, the ECB supported the financial market in the Eurozone via the widening of its existing Assets Purchase Programme by EUR 120 billion, as well as the new Pandemic Emergency Purchase Programme with a scope of EUR 1,350 billion until at least the end of June 2021. While the ECB left its interest rates unchanged (at 0.25%,0% and -0.5%), it introduced additional longer-term refinancing operations at a low rate of -0.5% (equal to the deposit rate). All of these helped to limit the increase of the unemployment rate, which went from 2.9% in February to 4.5% in July.

Public balance goes into the red

After four years of a balanced or positive public account, spending will exceed revenues in 2020 and 2021, resulting in the deepest public deficit since 1995 and bringing the public debt ratio at the Maastricht target of 60% of GDP. However, the Dutch current account balance should remain in surplus, but will decrease noticeably, with exports falling deeper than imports due to the lack of demand for goods that are shipped from the large Dutch ports to their main export destinations in the eurozone, the UK and US.

Prime Minister Mark Rutte (VVD, conservative-liberal) is successfully leading his third government since October 2017. His conservative coalition comprises of four parties and holds only 75 out of 150 seats in the House of Representatives. Rutte’s VVD gained support thanks to the handling of the COVID-19 pandemic, but also due to the PM’s role as the unofficial leader of the “frugal four”, the group of countries fighting for a frugal EU fiscal policy during the negotiations over the new EU fiscal support plan, by insisting on loans over grants. During these negotiations, the Dutch public support for the VVD went up from the 20 seats that they would have won in February to 37 seats in September (by far the strongest party in the parliament). Therefore, the re-election chances for Mark Rutte as PM are quite high for the next general election in March 2021.

In the Netherlands, bank transfers are by far the most common payment method for both domestic and export business-to-business transactions. All Dutch banks are linked to the SWIFT electronic network, which provides low-cost, flexible and rapid processing of international payments. Direct debit and different centralised local cashing systems are also widely used. Online sales are increasingly popular and most companies now use digital banking software. Cash payments are gradually disappearing and other payment methods, like cheques and bills of exchange are rarely used.

A debt collection process usually begins and ends by sending the debtor a (sometimes registered) collection letter. Sending letters (only) by email is becoming more and more customary. Besides the principal claim amount, the collection letter usually also includes a demand to pay accrued interest and extrajudicial costs. If the interest rates and/or costs have not been agreed by contract, Dutch law regulates the limits for both. If amicable actions, which include reminders by phone and possibly a debtor visit, do not result in full payment, the creditor can initiate legal action, in accordance with Dutch civil law.

In urgent cases, claims can be submitted for a fast track procedure (kort geding). These proceedings resemble those of the regular civil court but, if convinced of the plaintiff’s arguments, the judge (ruled by the President of the district court) delivers a verdict within a very short period of time – usually between two to four weeks. During this somewhat simplified procedure, the judge often makes a temporary or provisional ruling for more urgent matters. If, subsequent to this provisional decision, the parties do not reach a final settlement on all issues, they then need to obtain a final judgement in a “regular” civil suit (bodemprocedure). The fast track procedure in the Netherlands differs from the (European) payment order procedure used in many other European states. It always requires the assistance of a lawyer and personal appearances by all parties before the judge. As this makes the fast track procedure rather expensive, it is not often used in regular collection cases.

The regular civil court procedure, held in one of the eleven district courts (Rechtbank), is the most frequently used recourse of action. Claims of €25,000 or less are heard by a judge of the cantonal sector of the district court (kantonrechter), while claims in excess of €25,000 are presented before the civil law sector. The main difference in the civil law sector is that both the plaintiff and the debtor have to be represented by a lawyer, whereas in the cantonal sector parties are permitted to argue their own cases. Both types of procedures begin with a bailiff serving the debtor with a writ of summons. In many cases, debtors do not contest the claim or appear in court. This results in a judgment by default being given, usually within six to eight weeks. If the debtor does appear in court, the judge sets a date for them or their lawyer to prepare a written statement of defence (conclusie van antwoord). However, when appearing before a cantonal sector judge, debtors can represent themselves and plead their cases verbally. After the first plea, it is standard procedure for the judge to schedule personal appearances by both parties to obtain more information and to see if a settlement is possible (comparitie van partijen). If not, the court can either pass judgement immediately or, in more complex cases, give the plaintiff the opportunity to deliver a replication (conclusie van repliek). The defendant can then reply by rejoinder (conclusie van dupliek). These proceedings take, on average, six to twelve months.

A third and often effective procedure for collecting payments is by filing a winding-up petition at the district court. This type of petition must be filed by a lawyer and the applicant needs to submit evidence of a payment default on an undisputed debt and of the existence of at least one other creditor having an undisputed claim of any kind (for example, commercial debt, outstanding alimony or taxes). The debtor is then formally notified by a bailiff that a winding-up petition has been filed. To avoid bankruptcy, the debtor can choose to appear in court to dispute the claim (or the fact that there are other creditors) or propose an out of court settlement. As most debtors try to reach a settlement, these proceedings are often cancelled before the date of the court hearing. Otherwise, and if there is sufficient evidence, the debtor is then declared bankrupt. Approximately 95% of all bankruptcies result in no payment being received by non-preferential creditors.

Retention of title and right of reclamation

Besides initiating legal action or claiming retention of title (if stipulated), sellers of goods can often exercise their right of reclamation (recht van reclame) for unpaid goods. This entails sending the debtor a registered letter which invokes this right. The contract is thus terminated and by law, ownership of the goods returns to the creditor. However, this recourse of action does require the goods to be in their original state. The registered letter must be sent within 6 weeks of the claim being due and within 60 days of the goods being delivered.

Enforcement of a legal decision

If a debtor does not voluntarily comply with a court decision, the creditor can initiate actions to enforce the judge’s ruling. As most court decisions become effective immediately, creditors do not need to wait for the three month period of appeal to expire. Enforcement laws lay down statutory rules on coercive measures and how these measures can be applied. In the Netherlands, only bailiffs are authorised to levy enforcements and are instructed by the creditor. Two conditions need to be met before coercive measures begin. The bailiff must be in possession of a writ of execution (an original and enforceable judgment) and the party on which the enforcement will be levied must have prior official notification of the writ.

Court decisions rendered by other EU countries benefit from specific enforcement mechanisms, including the EU payment Order and the European Small Claims procedure. Decisions issued by non-EU countries can be recognised and enforced on a reciprocal basis, provided that the issuing country is part of a bilateral or multilateral agreement with the Netherlands. In the absence of such an agreement, an exequatur procedure can be carried out in the Dutch courts.

Corporate debt restructuring entails using the suspension of payments (surseance van betaling) procedure. The debtor is granted temporary relief from creditors, in order to allow them to reorganise, continue with business operations and ultimately satisfy their creditors’ claims, all under the supervision of a court-appointed administrator. A plan is proposed and must be approved by two-thirds of the creditors representing three-quarters of the total outstanding debt.

The debtor’s assets are liquidated by the court-appointed trustee. This procedure commences when the debtor has ceased payments and the District court has declared the debtor bankrupt. If a creditor makes a request for the debtor to be declared bankrupt, there must be at least two creditors with overdue claims. However, when liquidation is requested by the debtor, evidence of additional creditors is not mandatory.

The trustee establishes a list of creditors, the debtor’s assets are auctioned and the proceeds then distributed between the creditors. 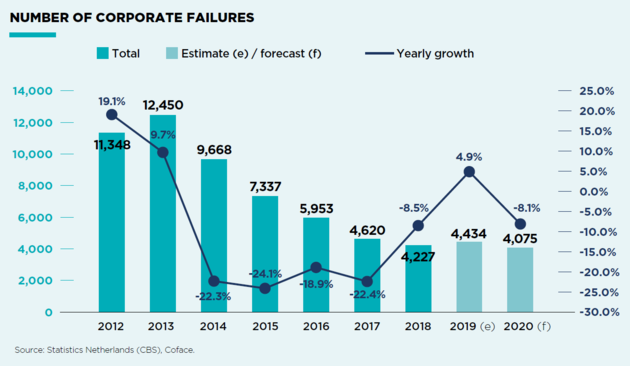